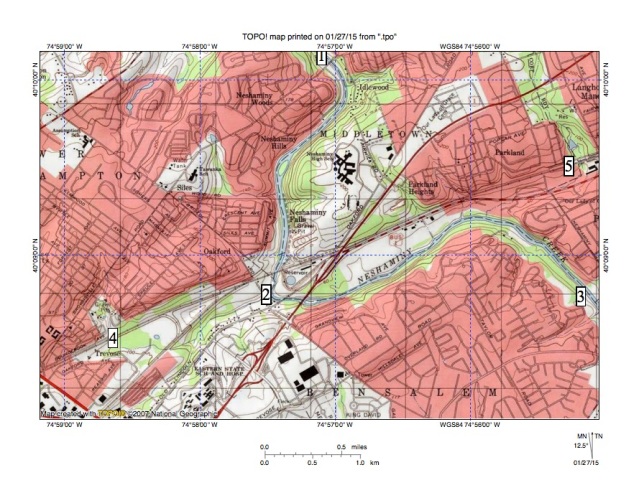 The northeast oriented Neshaminy Creek segment and its east and northeast oriented tributary flow in a linear valley that extends in figure 1 from location 4 to location 5 and that can be traced in a west-southwest direction to Jenkintown (the SEPTA West Trenton Regional Rail line between Jenkintown and Neshaminy Falls is located in the linear valley). The Somerton-Huntingdon Valley Through Valley and the Meadow Brook Through Valley essays on this website describe western segments of this linear valley between Poquessing Creek and Pennypack Creek and between Pennypack Creek and Tacony Creek. The linear valley probably is related to a geologic feature such as a fault line (the Pennsylvania Geological Survey web application map shows the valley located along the boundary between two different metamorphic rock units, although both units should be resistant to erosion and are resistant to erosion both north and south of the boundary).

At the time headward erosion of the Neshaminy Creek valley into the figure 1 map region occurred the Delaware River valley east of figure 1 and the linear valley did not exist. At that time the entire region was as high or higher than the highest elevations seen in the figure 1 map area today (more than 200 feet in terms of today’s elevations, although at that time sea level may have been significantly lower) and the present day valleys did not exist. Also at that that time massive and prolonged southwest oriented floods were moving in diverging and converging flood flow channels across the region. Floodwaters came from east and north of the present day south oriented Delaware River valley segment found east of figure 1 (after flowing in a southeast and south direction east of figure 1 the Delaware River turns to flow in a southwest direction to reach Philadelphia).