Introduction: Sandy Run is an interesting secondary drainage route as it drains the Chester Valley east end (also known as the Roslyn Valley) in a west-southwest direction, but instead of continuing a short distance further on the Chester Valley floor to join south oriented Wissahickon Creek, it turns in a north direction to flow through a narrow water gap carved between Camp and Fort Hills and then turns in a west and west-southwest direction to join south oriented Wissahickon Creek north of the Chester Valley. North of the water gap Sandy Run is joined by a west-southwest tributary known as Pine Run, which in turn is joined by a southwest oriented tributary known as Little Pine Run. All told the Sandy Run watershed covers an area of about 12.5 square miles, with less than half of that watershed area being upstream from the north oriented water gap.

Camp and Fort Hills today form a prominent quartzite ridge along the east-northeast edge of the Chester Valley east end and rise 150-200 feet above the early Paleozoic age and limestone-floored Chester Valley to the south and the shale and siltstone-floored Triassic age bedrock region to the north. The Sandy Run water gap is approximately 150 feet deep and is today used by two different railroads and two major highways as a route to cross the high quartzite ridge. The Sandy Run turn to leave the Chester Valley by flowing through a north oriented water gap carved across an erosion resistant quartzite ridge is odd because the prevailing regional drainage direction is in a south direction. Logically Sandy Run should continue in a west or southwest direction on the Chester Valley floor as it flows to reach south oriented Wissahickon Creek. Obviously, the Sandy Run we see today did not erode its water gap and the purpose of this essay is to determine how the water gap was eroded and the present-day Sandy Run drainage basin came into being.

The Sandy Run water gap problem: The Sandy Run water gap provides information that can be used to reconstruct conditions at the time the Sandy Run and Wissahickon drainage basins originated. Rhodes Fairbridge in the Encyclopedia of Geomorphology[i] states water gaps form where a river course established over a preexisting erosion surface has maintained its position while base level has been slowly lowered or broad regional uplift has occurred (antecedence). As a result resistant ridges stand out and major rivers cut across them in narrow transverse valleys. Fairbridge also mentions superposition as a second way water gaps can be formed, which means a stream maintains its position as overlying bedrock that buried an underlying structure (or ridge) is slowly removed.

Figure 2: Detailed topographic map of the Sandy Run water gap area. Sandy Run first flows in a west direction (1) south of Camp Hill before turning in a north direction to flow through the water gap (2) and then to join west-southwest oriented Pine Run (3). The combined flow then moves in a west direction as Sandy Run (4) to join south oriented Wissahickon Creek (5), which eventually reaches the Schuylkill River.

Sandy Run drainage basin bedrock units are early Paleozoic or Triassic in age and provide no evidence of geologic events that occurred since the Triassic Period, which almost certainly include multiple tectonic and erosion events. However no evidence exists today to suggest that the Sandy Run drainage route has maintained a position originally established on a bedrock surface that buried the Camp-Fort Hill quartzite ridge. In other words, no evidence suggests the superposition hypothesis explains the water gap formation. Likewise, the antecedence hypothesis also has serious problems. Sandy Run today is too small to be called a river, much less a major river, but assuming tectonic uplift or lowering does describe how the Sandy Run water gap formed it implies the Sandy Run water gap was eroded by north oriented flow in what otherwise must have been a south oriented drainage region. Perhaps even more serious is the implication that tectonic uplift or lowering somehow altered base level so as to make the resistant ridges stand above the surrounding surface. The Sandy Run drainage basin is so small it is difficult to imagine such a tectonic movement affecting only the narrow quartzite ridge.

Solving the Sandy Run water gap problem: If antecedence and superposition do not explain the Sandy Run water gap then how was the water gap eroded? Imagine the regional landscape before the Wissahickon Creek and its tributary Sandy Run drainage basin were eroded. Based on evidence seen in figures 1 and 2, the entire region at that time was at least as high as the highest points on Camp Hill (and perhaps higher if evidence further downstream in the Wissahickon drainage basin is also considered). Bedrock and geologic structures underlying that higher topographic surface were probably the same as seen on the present day topographic surface—the major differences were the regional drainage was completely different from what it is today and whatever streams existed were flowing on a topographic surface that no longer exists.

At some point, probably fairly recent in terms of geologic time, the drainage system on that high level topographic surface was overwhelmed by gigantic southwest oriented floods. The floodwater source cannot be determined from the Sandy Run drainage basin evidence, but was probably the melting of a large North American ice sheet. Whatever the flood source, immense quantities of southwest oriented floodwaters flowed across all of southeast Pennsylvania and in the region of interest to this essay were first captured by headward erosion of the southeast oriented Schuylkill River valley with floodwaters then moving in a south direction towards the actively eroding south oriented Wissahickon valley and in a west-southwest direction along the present day Chester Valley to reach the newly eroded southeast oriented Schuylkill River valley. 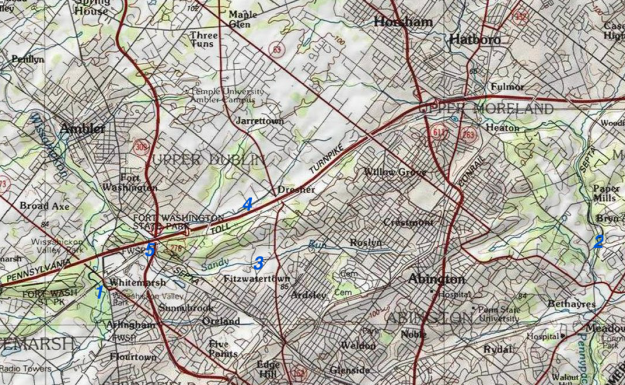