Ridley Creek originates in the Valleys Hills of East Goshen Township while the East Branch of Chester Creek originates a short distance to the west in West Goshen Township. From these closely spaced headwaters regions water flows along the separate, but roughly parallel, south-southeast and southeast oriented Ridley and Chester Creek drainage routes to eventually reach the city of Chester where the two streams almost meet before flowing into the southwest oriented Delaware River. 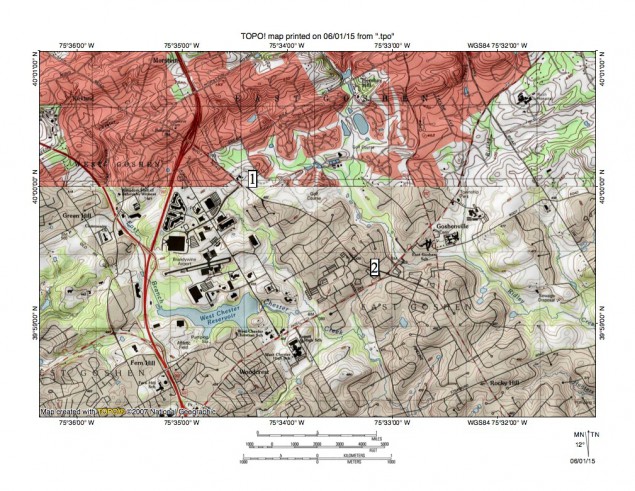 The drainage divide separating the East Branch Chester Creek and Ridley Creek drainage basins is marked by several saddles or notches linking tributary valleys draining in opposite directions. Locations 1 and 2 identify two of these saddles or notches. The saddle or notch at location 1 is approximately 30 feet deep while the saddle or notch at location 2 is more than 60 feet deep. North and south of Rocky Hill near the south edge of figure 1 are additional notches or saddles, which are about 30 feet deep. West of the West Chester Reservoir the drainage divide between the East Branch Chester Creek and the East Branch Brandywine Creek tributaries is also crossed by saddles or notches that are 30 or more feet deep.

The saddles or notches seen in figure 1 are evidence of closely spaced southwest oriented flood flow channels, such as might be found in an anastomosing channel complex, supplying large volumes of water to an actively eroding newly eroded East Branch Brandywine Creek drainage basin that crossed the region seen in figure 1 just prior to headward erosion of the deeper East Branch Chester Creek valley and its tributary valleys, which was followed by headward erosion of the deeper Ridley Creek and its tributary valleys. Evidence seen in figure 1 suggests headward erosion of southeast and south-southeast oriented anastomosing channel complex captured flood flow from a shallower southwest oriented anastomosing channel complex. Floodwaters came from the northeast almost certainly before deep erosion of the region to the northeast had occurred. The deep Brandywine, Chester, and Ridley Creek valley systems were probably eroding headward from what at that time was a newly eroded and deep Delaware River valley that was actively eroding headward along a major southwest oriented flood flow channel.