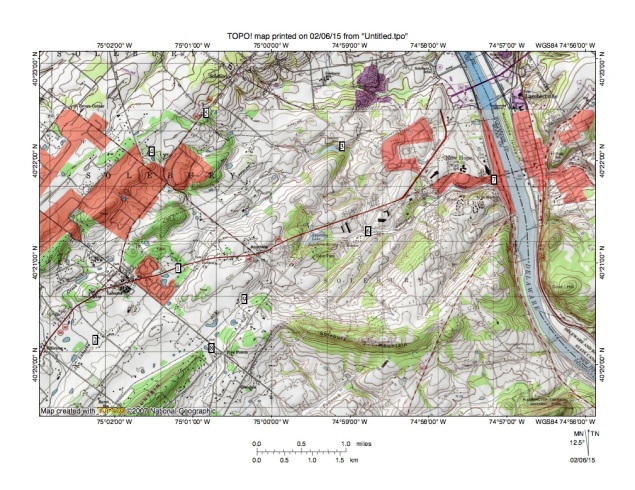 Many landforms seen in figure 1 are oriented in a southwest-to-northeast direction, although Solebury Mountain is a significant exception. Solebury Mountain is shown on the Pennsylvania Geological Survey web applications map as being composed of diabase and was formed when molten igneous rock intruded into the surrounding bedrock. The southwest-to-northeast orientation of the other surrounding landforms is related to the orientation of geologic features within that surrounding bedrock and deep erosion has shaped the regional landscape in accordance with those geologic features. Ridges are composed of erosion resistant bedrock while less erosion resistant materials underlie the elongate valleys. While the region has probably experienced a long and complicated geologic history the concern here is with the erosion event that shaped the landforms.

The present day landscape was shaped during an erosion event that began with a regional surface at least as high or higher than the highest points seen in figure 1. At that time the Delaware River valley did not exist and there was no Delaware River, nor did any of the present day Delaware River tributaries or tributary valleys exist. Instead massive and prolonged southwest oriented floods were moving across the entire region. The flood flow direction was probably shaped as floodwaters eroded shallow channels into the underlying bedrock in which southwest-to-northeast oriented structures are common throughout southeast Pennsylvania. Floodwaters were flowing in complexes of shallow anastomosing channels (diverging and converging channels) with water also moving freely between the channels. The deep Delaware River valley eroded headward into this high-level surface to capture the southwest oriented flood flow.